Your Life Story is Your Family’s History

Your life story is part of your family’s history. As many of us have learned our DNA ancestry dates back generations to specific regions of the world. Mine is a wide swath as both grandparents were immigrants from both North and South Europe.

Knowing this makes sense as it relates to the family customs and culture that remain with me to this day. Fond memories abound from both sides of my family.

Salata, walnut bread, family get togethers every Sunday at my Croatian grandparent’s house and the familiar good bye: laku noc or dovidenja were two phrases I never forgot. Also more colorful language I will not repeat here. With 5 uncles crowding around the television set in their small living room the atmosphere would be highly charged as the Lions made their play.

One thing that struck me was the answer to my question I put to my Uncle Andy, the oldest brother. I was always curious about their country as he was the only sibling to be born in Croatia, since at that time part of Yugoslavia,

Uncle Andy had migrated to America with my grandma in the second decade of the 20th century. My grandfather had come over first and established a homestead for them after 15 years. Then they came through Ellis Island. I found that incredible that they were separated so long.

My question was: “ Don’t you want to go back and see your country again?”

I will never forget his answer. As a young girl I had only a vague knowledge of what a Communist country was and what it was like to live under that form of government.

And even though Croatia when he migrated was just beginning its transformation, he understood the realities of what had happened there. So his answer was an emotional “No! What for?”

He quickly explained that freedom and home and everything he and his family had worked so hard for to make a life was in America. He had no desire to ever leave that. Pretty powerful statement!

This large family of seven was supported through hard work with their own business. I think that was definitely passed down to me-that you can achieve economic well-being through your own efforts.

There are many more stories I can tell about both families but I will leave it for now. It’s been a pleasure on All Soul’s Day to remember those family members part of my ‘tribe.’ That tribe really counts to the thousands living and dead.

It shows how extensive a reach is our bloodline and how deep it leads into many intersecting countries. On All Soul’s Day we can all remember those that make up our personal families and the connections we all have to the human family! 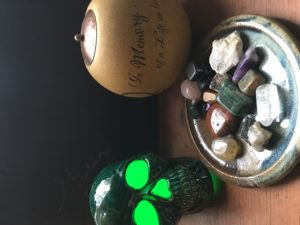